Many years ago when my family arrived in Uruguay as missionaries, all we could see were people SO in need of the Lord. BUT, how do you reach a person who won’t even raise his eyes to you or a neighbor who won’t even greet you?  I, Arnie, decided that I needed to go SOMEWHERE where people were hurting AND open to hear the Gospel. Where is it that people are hurting? Certainly in the hospitals and in the prisons. I had had a previous experience in the prisons in Bolivia, having personally been enclosed while the police were investigating a vehicle that hit MY truck. (In some foreign countries, being a foreigner, YOU are wrong, almost always!!!)  My curiosity and desire to serve within the prison system began. That was where I wanted to go to meet the Uruguayan people and their needs.  BUT once again, there were many holdups. Everyone I knew in Uruguay said this country is different, you can’t possibly go into those prisons, you will never get out again (Uruguay was under a military regime at the time). But God had placed the desire and I knew He would find a way. At a Pastoral meeting, a little old French lady stood up pleading for some pastor to help her in the prison work of the Salvation Army. There was my opportunity! I didn’t even need to go to the government to ask for permission. 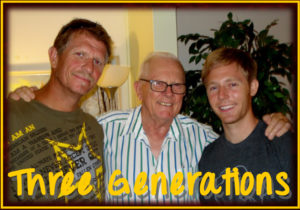 The beauty of this opportunity was that in just a few years, the government returned to a Democratic one and amnesty was given to hundreds of political prisoners, many of whom we had already reached with the Gospel. This gave us an opportunity to begin Home Bible Studies in many parts of the Montevideo area, and some way out in the country. That is how our church in Uruguay really began to grow. And so began my desire to volunteer here in the Pinellas County Jail system in Florida, when we retired as foreign missionaries. Our son Jeff, who as a young man swore he would never do “that” – is now living in Spring Hill, FL, and a young dynamic guy in his church has challenged Jeff to go with him into the large Federal Prison of Inverness, FL. Jeff is enjoying this challenge, and although he is a bit shaky, he is certainly being “touched” by the guys he is meeting. He is trusting that he is touching their lives as well. Jeff’s son, Brandon, lives here in St. Petersburg by us. He worked for a while at a rehab place for teenagers. He loved it, and decided on his own to apply to the Chaplain at the same jail where I volunteer – to meet with some of the juveniles there. He faithfully went into the jail week after week, without one single boy being courageous enough to come out. Finally he met with two new boys, one very rebellious. Near the end of his time there, this young man came around and began to open up. Although we are nothing but simple men, we have a heart for those behind bars. The statistics say that inmates involved in “religious” programs are much less apt to return to the prison system. We love to offer them our PMA Bible lessons to fill their minds with Truth. Pray with us as 3 generations share with inmates the transforming message of the Gospel.